Efficient handling and processing of particulates is critical to profitable manufacture of pharmaceutical products. Over 75 percent of all pharmaceutical products are in the solid dosage form and particulates are involved in almost every stage of the manufacturing process. A recent US-FDA report on the pharmaceutical industry estimated that worldwide cost savings from manufacturing improvements could be as high as US$ 90 billion per year. Regulatory constraints have traditionally encouraged an empirical and incremental approach to process improvement. Quality assurance through inspection rather than through design has previously been the norm. However, this is now changing and there is a growing awareness of the need for improvement in the science and engineering of drug development.

The introduction of manufacturing methods based on product performance specifications, rather than solely traditional practices, is increasing along with advanced computer modelling and measurement techniques to facilitate a better understanding of the interaction between material properties, equipment design and operating conditions. Simulation is used to trouble-shoot operational problems, test virtual design prototypes and increase fundamental research in the understanding of processes. Use of simulation has been proven to produce significant returns by reducing time-to-market, better utilisation of engineering resources and improvement of product and quality consistency throughout the manufacturing process.

The application of CAE techniques is being encouraged by FDA initiatives such as PAT which require companies to provide better verification of their manufacturing processes and Pharmaceutical ‘Current Good Manufacturing Practices’ (cGMP) which encourages a science-based approach and the early adoption of new technological advances by the pharmaceutical industry.

Product performance is the key to the value of pharmaceutical products. Solid dosage forms of product must meet requirements of uniformity of content, bioavailability, physical and chemical stability, and mechanical integrity. Products must contain an amount of API that correctly matches the formulation. This is particularly important with the introduction of peptide and protein-based drugs as well as high-potency drugs. Disintegration, dissolution and controlled release of drugs in tablet form all govern the bioavailability of the API. Delivery of the correct amount and proportion of active ingredient is also critical in inhalation and injection of drugs in powder form.

Evolving delivery methodologies for Pharmaceutical products coupled with increasingly tight tolerances demand robust process design, measurement of operating conditions, analysis between material properties (and their environment at a particle scale) and improvements in valid technical information during the R&D stage.  Control and risk reduction can only be reliably delivered through computer simulation of particle based process models. Understanding the relationships in this controlled manufacturing environment is the key to making systematic improvements.

Discrete element modelling is a particle-based simulation technology that is increasingly being deployed in design and optimisation of pharmaceutical manufacturing operations. The Discrete Element Method (DEM) is a numerical method which models the movement and contact between each particle. A DEM model particle can represent either a single particle or a group of particles in the physical system. The most common and physically accurate implementation of DEM is the ‘soft contact’ approach which calculates the forces acting on each particle using models which can account for the particle’s mechanical and surface properties.

DEM is very well established as a powerful tool for studying the mechanics of granular bulks. DEM software tools such as EDEMTM, can model both particles and equipment and enable direct application to complex processes. EDEMTM provides a framework for investigating the relative effect of a particle’s material properties, environmental conditions and equipment design. Factors such as particle shape, surface properties (e.g. cohesion and electrostatic charge), temperature and moisture content can be accounted for using appropriate models. Particle-fluid flow can be modelled by co-simulation with Computational Fluid Dynamics (CFD). This capability allows simulation of processes such as tablet coating and powder inhalers.

Dry Powder Inhalation (DPI) devices are designed to deliver a drug in powder form to the pulmonary tract. Designs include pre-metered and device-metered DPIs which may be driven by the patient inspiration alone or with some sort of power-assistance. The most important attributes in DPI design are the reproducibility of the dose and particle size distribution. In DPIs, complex interactions may occur between the drug substance, the carrier, and components of the container and closure system that significantly affect the safety and effectiveness of the drug product. For example, a combination of gravitational, fluid dynamic, electrostatic, van der Waals and capillary forces is responsible for the fluidisation behaviour exhibited by powders in an inhaler. Electrostatic charge interactions influence the overall efficiency of a DPI since such forces are considered to be significant for attraction and adhesion between the API particles, excipient particles and device surface. Particle size distribution, morphology, and moisture content can also greatly influence the bulk properties of the formulation and the product performance.

DEM simulation provides a means of investigating the interactions between particle types and DPI device design. A particle-fluid system such as a DPI requires a coupled DEM-CFD to model the fluid as well as the particle dynamics. EDEMTM can be directly coupled with CFD software making it possible to model processes such as entrainment of particles from the cavity within the inhaler, the impact, break-up and adhesion between powder and device surfaces.

Figure 1 shows the start of the entrainment of powder particles from the cavity. An airflow simulating inhalation of breath was applied across the cavity to entrain the powder particles. The powder in the model comprises small 50 micron API particles attached to larger 200 micron carrier particles. The strength of the adhesive bond can be varied in the DEM model to estimate the susceptibility to impact forces experienced during entrainment and transport through the device. This bond correlates with those formed during the mixing and blending of API and carrier.

As the powder particles travel through the DPI they can impact the interior surfaces of the device as can be seen in Figure 2.

Streamlines of powder particles though the inhaler showing the impact and rebound of some particles.

If the force of impact is high enough, the API particles may detach from the carrier particle. The smaller API particles will not be transported at the same rate as the carrier and will be more prone to stick to other similar particles and to the walls of the inhaler. 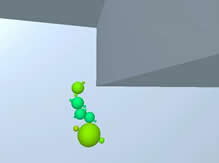 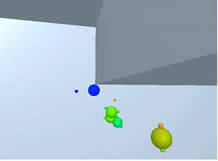 Impact of a powder particle with the internal surface of the inhaler which breaks the bond between the carrier and the API particles.

DEM simulation provides a means of tackling the challenging problem of designing and optimising DPIs for specific drugs to achieve the required level of performance. The complexity of the interactions within dry powder inhalers requires a particle-scale solution which DEM provides. EDEMTM can model all of the forces acting on powder particles in an inhaler including electrostatic forces between particles and tribocharging of particles in contact with device surfaces. It is uniquely capable of interfacing with other CAE tools such as CFD to simulate complex multi-physics processes such as those in a dry powder inhaler.

Tablets are the most common solid dosage form. After pressing, tablets are often coated to protect them from mechanical damage, mask unpleasant taste, aid in swallowing and prolong shelf-life. Coatings are often designed to facilitate controlled release of the drug in the gastro-intestinal tract, for example, enteric coatings which are resistant to acid in the stomach. Coating is still largely a batch process commonly carried out in rotating drums. The charge of tablets is slowly circulated through rotation of the drum and movement by baffles. The coating is applied in the form of a spray to the surface of the exposed tablets. The optimum drum rotation speed and spray flow rate will maximise tablet coating while minimising damage to the tablets and the likelihood of tablets sticking together.

Pharmaceutical process engineers often must deal with a large range of tablets and coating characteristics using a limited set of coating equipment. Tolerances for damaged and broken tablets are low, and the coating must be as uniform and consistent as possible. Tablet attrition also presents problems of contamination by dust and fine particles resulting from abrasion and impacts between tablets, walls and baffles of the coater.

Much of the information obtained from a DEM simulation of the coating process, such as the contact forces acting on each tablet, cannot be directly measured. The magnitude and frequency of these forces determines the likelihood of tablet damage, particularly during the period before it comes into contact with the coating fluid. The resistance of a tablet to impact will depend on its mechanical strength, which is a function of the material properties of the tablet constituents and the characteristics of the die pressing operation. The latter can be modelled using DEM combined with finite element analysis. Variation in the strength properties of individual tablets can be introduced into a DEM model to represent the observed variation. Mean tablet strength is obtained from tests on tablets and is used to calibrate the DEM model.

Figure 1 shows the total compressive force acting on each tablet at a moment in time as a baffle moves through the bed of tablets. It identifies the regions in which tablets are experiencing the largest impact forces. Analysis of the frequency of impacts can also identify other causes of damage and particle attrition through repeated impacts and abrasion. By running the simulation at different drum rotational speeds, the change in the magnitude and frequency of impacts can be predicted and an estimate made of the maximum safe speed required to keep the level of tablet damage toimum. 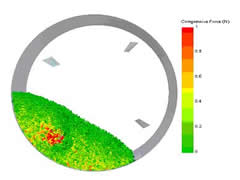 Distribution of contact forces acting on tablets in a drum coater. The image shows a section through the coating drum and the baffles. 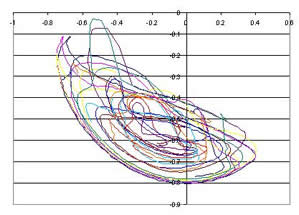 Path taken by selected tablets during a number of rotations of the coating drum.

The objective in tablet coating is to coat each tablet as quickly and uniformly as possible. The time spent in the spray zone will govern not only the rate of pickup of spray but also the susceptibility to damage. Figure 2 shows the path taken by some of the tablets starting from different locations within the bulk. Analysis of the position and velocity of tablets gives the time taken to first reach the spray zone and the residence time within the zone. Tablets are less susceptible to damage once the coating is applied. Accumulated and peak impact forces prior to coating are a good indicator of potential damage.

DEM is used to optimise the design and operation of tablet coaters by providing information on the impacts experienced by each tablet as well as the time spent by each tablet in the spray zone. It provides users of tablet coaters with a means of predicting the likelihood of damage to a particular type of tablet within a given coating apparatus. Manufacturers of tablet coaters can use DEM simulation to accelerate the design of new equipment to meet market demand. It is possible also to incorporate models for the spraying process as well as a CFD model of the drying air. This “virtual tablet coater” can be used to explore a wide range of design and operating conditions to find the combination which best meets the product requirements.

EDEM(TM) is being used to provide designers and manufacturers with new information to improve desired product throughput and quality as well as resolve key operational issues. Improvements in design and control will give pharmaceutical manufacturers better and more consistent quality products to meet the requirements for new drug formulations and delivery systems for the future.