Facing the Autoimmune Epidemic Prevention and treatment by novel vaccines

Particular fucosylated glycans and glycosides, are sole anti-inflammatory immunomodulators that upon binding to the cell-surface receptor DC-SIGN, bias dendritic cells toward a tolerogenic phenotype with production of Treg cells and immunotolerance. This antigen-specific anti-inflammatory response, stimulated by vaccination, would allow the economical treatment and prevention of autoimmune diseases, without immunosuppression.

That autoimmune diseases are on the increase worldwide indicates that they are the result of environmental rather than genetic changes. Once believed to be a problem affecting only the West, new epidemiological data shows that the incidence of autoimmune conditions is increasing globally [1]. Among the many factors thought to be relevant, the increase in autoimmune conditions correlates quite well with an improved public health care. Indeed, better sanitary conditions have resulted in a major decrease in helminthic infections with a concomitant increase in autoimmunity. A situation that may be explained by the immunological ‘understanding’ between the host and the parasitic helminth, a result of millions of years of adaptation. Indeed, to avoid destruction by the host’s pro-inflammatory immunoresponse, which due to the parasite’s mass would also cause damage to the host, helminths has developed methods to avert an inflammatory immunoresponse while eliciting immunotolerance [2]. An objective that the parasite has achieved by mimicking the anti-inflammatory immunity present during pregnancy to prevent foetal rejection. Actually, helminths produce numerous compounds which bias the immune system toward an anti-inflammatory tolerogenic phenotype, this way averting T-cell mediated autoimmunity [3]. Actually, this induced tolerance, may explain why autoimmune diseases are rare in places with high incidence of helminthiasis.

Hence, it is expected that as worldwide helminth parasites are eradicated, due to better public health practices, there will be an increase in autoimmune conditions. A situation that calls for methods to treat and prevent these conditions, that is both safe and economical. In fact, the widespread use of immunosuppressive drugs may increase the risk of bacterial and viral infections, among other pathogens; particularly in areas where public health is still evolving. Hence, safer but affordable alternatives to the immunosuppressive drugs and biologics, are urgently needed.

The immunosuppressive approach to treat autoimmunity

Comparable to the helminths’ strategy, the therapy and prevention of autoimmune diseases would require the induction of an anti-inflammatory Th2 immunity, while inhibiting the damaging T-cell mediated pro-inflammatory immunities [4]. Indeed, replacing the pro-inflammatory Th1/Th17 immunities by a humoral anti-inflammatory Th2, would prevent tissue and organ damage. An approach that would require active immunotherapy or vaccination, in order to induce an antigen-specific sole anti-inflammatory Th2 response; an effort that so far has been unsuccessful. Yet, in autoimmunity the inhibition of both pro and anti-inflammatory immunities, i.e. Th1, Th2 and Th17, can be achieved by either global immunosuppression or check-point based immunotherapy [5]. In the first case, administration of drugs that inhibit DNA or protein synthesis, will shut down the immune system, blocking both pro and anti-inflammatory immunities. A situation increases the patient’s vulnerability to infections and cancer. In the check-point based immunotherapy, specific immune pathways critical for inflammation are blocked by biologics, like soluble receptors and monoclonal antibodies, reducing but without eliminating immunosuppression.  While these approaches cause a fast relieve of the autoimmune condition, the long-term administration of immunosuppressive agents may have serious side effects. Also, while the global immunosuppressive agents are relatively economical, the safer biologics are quite expensive, even by wealthy countries’ standards; a factor that limits their availability [6].

An effective alternative to immunosuppression, would be to elicit an antigen-specific anti-inflammatory immunity, inducing immunotolerance to a self-antigen(s). An objective that could be attained with vaccines that besides a self-antigen(s), have adjuvants or immunomodulators that induce Th2, while inhibit but without abrogating, Th1 and Th17 immunities [5]. In fact, the pro-inflammatory immunities are needed for protection against infections and cancer. Although many pertinent self-antigens are known, the lack of anti-inflammatory adjuvants have been the main obstacle to these vaccines’ development. While alum and oil/water emulsions have been traditionally considered anti-inflammatory adjuvants, new information questions that assumption [7], which may explain these vaccines so far disappointing results.

Immunotolerance: The response to autoimmunity

Immunotolerance or the inability to mount an immunoresponse against a specific antigen, is not induced by immunosuppression which shutdowns the entire immune system. Immunotolerance can be either natural or induced. Where ‘natural,’ implies the tolerance to the body’s own self-proteins, while ‘induced’ refers to the non-self or exogenous antigens. Therefore, failure of the ‘natural’ immunotolerance can lead to pro-inflammatory autoimmunity, which may be halted by producing an “induced” immunotolerance against a self-antigen. Since attempts to restore natural immunity have been unsuccessful, a useful strategy would be to deal with the self-antigens as if they were exogenous ones; substituting the harmful T-cell mediated immunity by an anti-inflammatory Th2 immunoresponse [4,5]. An approach backed by the tolerogenicity induced by helminth parasites, which as previously described, to prevent damaging pro-inflammatory responses, bias the host’s immunity toward an anti-inflammatory Th2 immunity.

Because of the immune tolerance induced by these parasites, the use of helminthiasis has been proposed to treat autoimmune conditions. An improbable situation, considering its difficult management and public health hazards. Besides, immunological and biochemical evidence have shown that helminths secrete anti-inflammatory agents, which bias the immune system towards tolerogenicity. Since the structures and mechanisms of action of several of the compounds responsible for triggering an “induced” immunotolerance, against the parasite and self-antigens, are well-known, they provide the blueprints needed to develop novel and effective anti-inflammatory adjuvants. Indeed, some glycans and glycosides have been identified which are capable to induce a tolerogenic immunoresponse; compounds that will be described here.

Attempts to restore ‘natural’ immunotolerance by causing clonal anergy and/or deletion of autoreactive T-cells, have been disappointing [5]. Hence, an option would be to establish an ‘induced’ immunotolerance against self-antigens, replacing the harmful T-cell mediated autoimmunity by the safer, anti-inflammatory humoral immunity. A process that starts at the dendritic cell (DC) level, the antigen presenting cells that initiate and control immunotolerance, by preventing, inhibiting and/or modulating T cell-mediated effector responses [8]. Although DCs have numerous phenotypes, here they would be sorted into immature (iDC), mature (mDC) and tolerogenic (tDC) phenotypes. Exposure of iDCs to exogenous antigens concurrently with exogenous or endogenous “danger” signals, will initiate a differentiation process where they become mDCs, capable of stimulating T-cells to pro-inflammatory Th1 or Th17 immunities.

Examples of exogenous danger signals will be lipid A and flagellin, both bacterial products, while endogenous signals would be degraded hyaluronic acid and DNA, released by dying cells. Therefore, mDCs show among other things, an upregulated production of MHC, co-stimulatory molecules and pro-inflammatory cytokines. However, under certain conditions, iDCs can differentiate into tDCs, which incite the production of regulatory T-cells (Tregs) that induce tolerance, suppressing T-cell immunity and preventing autoimmunity [4]. Thus, the production of Tregs is needed to induce tolerance against a self-antigen; an objective that adjuvants like alum cannot deliver. 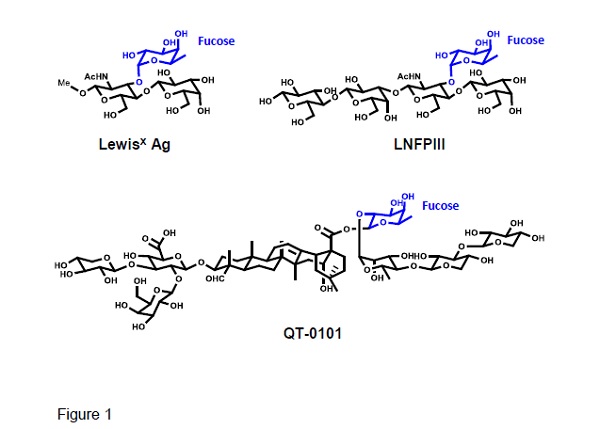 Experimentally, tDCs can be obtained by using i) biologics, e.g. IL-10, ii) pharmacological agents, like rapamycin, and iii) genetic modifications of the DCs [8]. Laborious and expensive methods that usually entail harvesting of the cells and ex vivo processing. Remarkably, helminths to induce in the host immunotolerance by switching the pro-inflammatory Th1/Th17 to Th2 anti-inflammatory immunity, take advantage of the DC’s lectin receptor DC-SIGN [9].  This receptor can bind either mannose or fucose, with the binding of mannose biasing the DC towards a mDC inflammatory phenotype, while binding of fucose induces a differentiation to tDCs, which polarizes the response to a Th2 immunity [4,9]. Thus, protein antigens linked to fucosylated glycans like LewisX antigen and LNFPIII (Fig. 1) will bind to DC-SIGN, which by receptor-mediated endocytosis delivers antigens for intracellular processing by DCs [10,11]. The combined activation of TLR4 by lipid A, and DC-SIGN signalling in the presence of IL-4, upregulate the expression of anti-inflammatory cytokines, e.g. IL-10, while downregulating the pro-inflammatory ones, e.g. IL-2 and IL-17, leading to Th2-inducing DCs [12-13] (Fig. 2). Hence, naïve T-cells in the presence of Th2-inducing DCs plus IL-4, will promote a Th2 cell immunity, required to induce tolerance against an antigen. 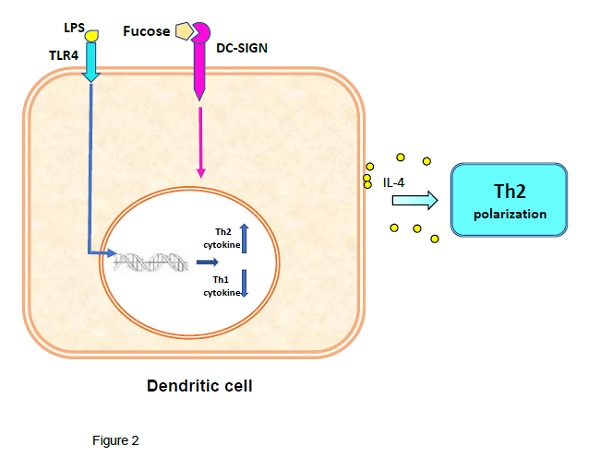 Role of DCs in the production of Th2 immunity. Concomitant stimulation of TLR-4 and DC-SIGN signaling by fucosylated agents, are the main drivers of differentiation of iDCs to tDCs.

Fucose binding to DC-SIGN, biases the immunity toward Th2 in an antigen-specific manner. Thus, autoimmune diseases may be treated with vaccines having self-antigens with fucosylated glycans as Th2 adjuvants. Fucosylated glycans, like LewisX antigen and LNFPIII, found in helminths, cancer cells and during pregnancy, induce immunotolerance but not immunosuppression. The codelivery of self-antigens and fucosylated glycans to DCs by receptor-mediated endocytosis, favours the production of antibodies with enhanced affinity. Indeed, covalently linking fucosylated glycans to antigens, elicits a better Th2 immunoresponse. The beneficial effects of this approach have been shown preclinically by prolonging heart transplant survival by the administration of LNFPIII [14]; treatment that resulted in Treg cells increase. Studies with the Myelin Oligodendrocyte Glycoprotein (MOG), have shown that the removal of fucose from this glycoprotein, resulted in an increase in the strongly pro-inflammatory Th17 immunity [15]. A situation that strengthens the role of DC-SIGN and fucose in maintaining immunotolerance.

An alternative to the fucosylated glycans is the new immunomodulatory QT-0101, a well-defined plant-derived glycosides preparation (Fig. 1), carrying a fucose residue unrelated to that of LewisX antigen [5.16]. That such a fucosyl residue binds to DC-SIGN, confirms this receptor's binding site plasticity. Basically, QT-0101, that paradoxically is a derivative of the strong pro-inflammatory adjuvant QS-21, induces an antigen-specific Th2 immunity with inhibition of the Th1 and Th17 immunities, and production of Tregs [17,18]. Immunological events that are antigen-specific and thus relevant to vaccines. The amphipathic QT-0101 can form complexes with protein antigens stabilized by ionic and hydrophobic interactions, without a need for covalent linking. This allows delivery of the antigen to the same DC being activated by QT-0101 and biased toward the tDC phenotype. However, QT-0101 can be also linked covalently to polypeptides if needed. As with the fucosylated glycans, QT-0101 elicits Tregs and it is not immunosuppressive. Furthermore, its toxicity is significantly lower than that of its precursor QS-21, which is an adjuvant approved for human vaccines. Because it is derived from a natural product, QT-0101 is amenable to large scale production under good manufacturing practices (GMP) in an economical manner.

Because of their cost and easy use, vaccines are an effective alternative to biologics in the treatment of autoimmune conditions. Yet, they may be also useful to prevent autoimmune conditions, in cases where well-known genetic risk factors exist. Moreover, QT-0101 is also suitable for use in vaccines against proteopathies, like Alzheimer’s disease [18]. Vaccines that are different from the past disappointing ones, they would induce a sole anti-inflammatory antibody response, rather than a damaging pro-inflammatory one. Application of medicinal chemistry methods, could allow the development of new anti-inflammatory adjuvants related to QT-0101. Of significance, since the scarcity of these compounds has been the main reason for the lack of progress in vaccines against autoimmune diseases and proteopathies. 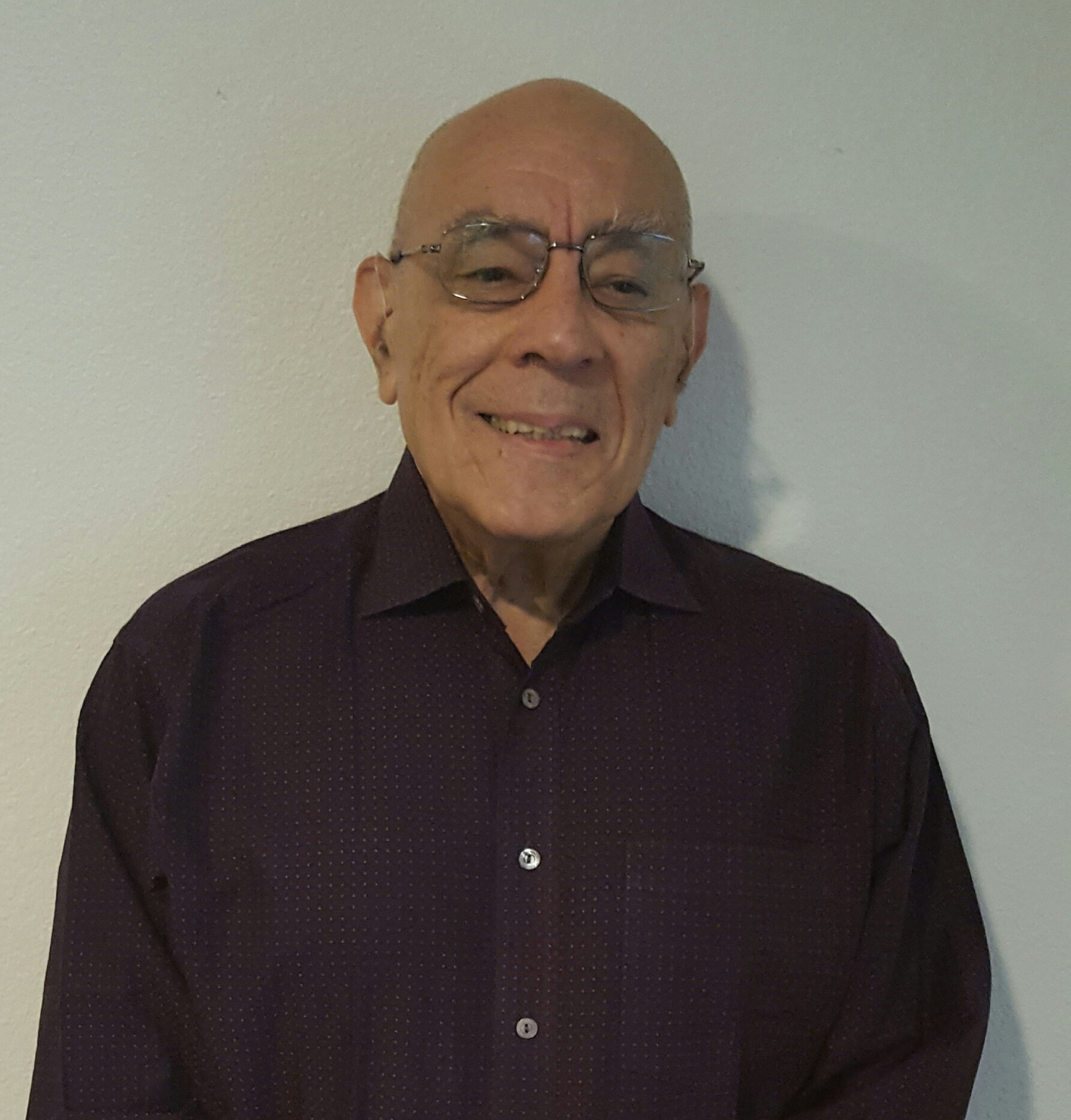 Dante J Marciani is President and Chief Scientist of Qantu Therapeutics, Inc. He has advanced degrees in Biological Sciences and Chemistry from the Universidad de San Marcos in Lima, Peru, and Colorado University at Boulder, CO. He was a researcher at the National Institutes of Health in Bethesda, MD. He directed the development of the adjuvants QS-21 and GPI-0100, as well as several vaccines. He is exploring the uses of anti-inflammatory adjuvants, e.g. QT-0101, in vaccines for autoimmune diseases and proteopathies. He is the author of numerous scientific publications and holds several patents.