Skin quite literally “holds everything together”. In the event of a burn injury to the skin, the body goes in a state of shock or trauma, the trauma being both physical and psychological. Treatment of a burn basically focuses on two things, prevention of infection and closing/healing of the wound. The healing is mostly natural and takes its own course.  Apart from the unbearable pain, the sign of a severe burn stays for life. This creates a deep psychological impact on the patient who often finds it difficult to come out of the psychologically devastating event. So much so that a study indicates that the post operative suicide rate among burns patients is close to 90%.

Mother Nature has provided us with a wonder cure for burns in the form of egg yolk oil. This cure has been re-discovered in the form of OLEOVA by VAV Life Sciences Pvt Ltd, an Indian company headquartered in Mumbai. Established in 2003, VAV believes that nature provides us with an abundance of resources to aid our own healing.  Equipped with modern state of art R&D facility, VAV is growing progressively in the field of nutraceuticals. Currently the company exports its products to more than 38 countries. VAV boasts of a wonder cure for burns in the form of OLEOVA which is egg oil extracted from yolk of chicken eggs. OLEOVA is rich in triglycerides, essential fatty acids like Omega 3 (DHA) & Omega 6, cholesterol and antioxidants like lutein and xanthophylls.

HEALING THE WOUND, FASTER with oleova!

Skin is a lipid membrane and is composed of sub units of fats called fatty acids. These fatty acids are essential for skin regeneration and healing. The fatty acid profile of egg yolk oil matches very closely to that of skin and hence it integrates well into the skin and aids faster re-epithilisation. In addition, egg oil has the essential fatty acids like the Omega 3 (DHA) and Omega 6 acids, which are not produced in the body in sufficient amount and have to be supplied externally. There are a very few natural sources of the essential fatty acids, egg oil being one of the richest. Because of cholesterol, it is absorbed to a much greater extent.

In a study conducted at University of Leipzig, clinical healing rate with egg oil and silver sulfadiazine was comapred among second degree burns patients. It was observed that the wound healing was 50% in 7 days  complete within 2 weeks in case of egg oil while it was only 70% in two weeks for silver sulfadiazine.

Another study conducted by Shiraz University of Medical Sciences, Iran proved that wound size decreased significantly with complete re-epithilisation of the skin in the egg oil treated group of rats inflicted with third degree burns.

Skin guards us from infection by millions of pathogenic bacteria present in the environment. A burn injury to the skin breaks the dermis and exposes the inner membranes. This makes them prone to infection. All the burn medications focus on preventing any further infection as they incorporate many anti bacterial agents.

Egg oil has a potent anti-bacterial effect which has been well documented. In the study conducted at University of Leipzig, it was found that upon treatment with Egg Oil there was no growth of gram-negative bacteria and the wounds on the 7th day were more sterile than on the day of accident.

Another independent study proved that egg oil has anti-microbial effect detectable on both bacteria and fungi. Growth of  bacteria like E.coli and Staphylococcus aureus was decreased and that of the fungi like Candida albicans and Aspergillus niger stayed constant over the tested time of 28 days.

A burn injury scars the psyche of the patient. The pain might go and the wound may heal but the sight of scar is a constant reminder of the trauma for the patient. Egg oil has the power to make the scars go forever.

In a study conducted at Municipal Hospital Offenbach by Prof. Dr. Kitschke scar healing was studied in 23 patients post surgery. The treatment with Egg Oil was done daily on the scars.There was no side effect in any patient. The scar development was controlled to a great extent. In comparsion with the applied control substance a series of significant characteristic differences were found on the side of the scar treated with Egg Oil. These differences not only affected the scar tissue but in part also the immediate surrounding area.

Oleova is SAFE AND NATURAL

Egg oil is a completely natural product. It is well tolerated on the skin. A study conducted at the Institute for experimental Dermatology, University Witten-Herdecke by Professor Tronnier proved that egg oil caused no irritation to the skin and improved the skin surface in terms of increasing suppleness, smoothness and decreasing scaliness and wrinkles.

VAV uses a proprietary technology for producing OLEOVA. This technology preserves the therapeutic properties of egg oil in OLEOVA. The extraction process is a cold process that does not involve the use of any solvents or heat. This process also eliminates all the proteins and this makes it safe for use by people who are allergic to eggs. Hence, OLEOVA is completely safe to use.

A PICTURE IS WORTH A THOUSAND WORDS

An accident caused as severe injury to a nine month old boy. The injury covered 4 % of the body surface of the boy. He was treated with egg oil and re-epithilisation was observed as early as 3rd day with complete healing within 7 days and no scars in 4 weeks. 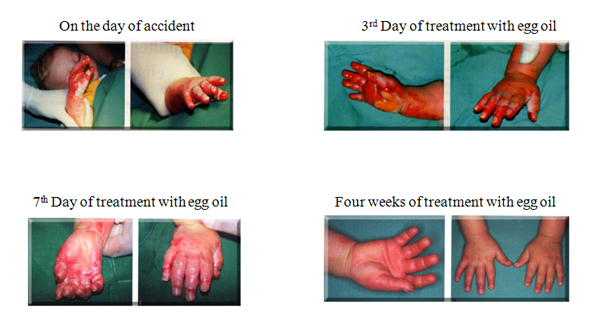 The author is working with VAV Life Sciences Pvt Ltd. From a modest beginning in 2003, VAV has been growing steadily offering its products and services globally and has several reputed companies as customers. VAV uses modern technology to tap the therapeutic potential of our natural resources especially with respect to ancient medicines for various pharmaceutical, biotechnology & nutritional applications. VAV has a modern Research & Development facility with skilled and experienced scientists performing development work.