Magnetic Nanoparticles and their Application Studies on Synthesis Characterisation

Nanotechnology has been used extensively in recent decades to develop new diagnostic and therapeutic approach for different diseases. The design of nanocarriers to deliver the therapeutic agents used to the target organs. A wide variety of nanomaterials, including fat polymers, micells, dendrimers, inorganic nanoparticles, quantum dots, and metal frames, have been developed for this purpose.Magnetic nanoparticles (MNPs) are source for crucial part in pharmaceutical research and development. The physical and chemical characteristics of MNPs varies from bulk-to-bulk quantum mechanical scale results and high surface area that alters the exponential magnetic properties. some of the MNPs displayed surface superparamagnetic property, as a like solitary molecule spoke to solitary attractive segment. These MNPs are of tremendous value due to their possible application in various field like pharmaceutical sector and catalysis.

Nowaday’s MNPs have received significant interest in biomedical science and also, they capture the researchers from pharmaceutical industry and environmental science. Here we discussed on MNPs types, structure and characteristics and also focus on synthesis, characterisation and application in drug delivery field.

MNPs are classified into four types such as paramagnetic, ferromagnetism, antiferromagnetism, ferrimagnetism these were differentiated depends on their several magnetic iron forming states at the time of crystallisation process. Shows in fig.1. Randomly aligned of magnetic motion of the ironcrystals with zero magnetisation demonstrates paramagnetism types of MNPs, when external magnetic field applied on paramagnetism resulted in their moment aligned with small magnetisation.Similarly, their independent magnetic moment of ferromagnetic, and antiferromagnetic are randomly aligned while there is no external magnetic field present at all. 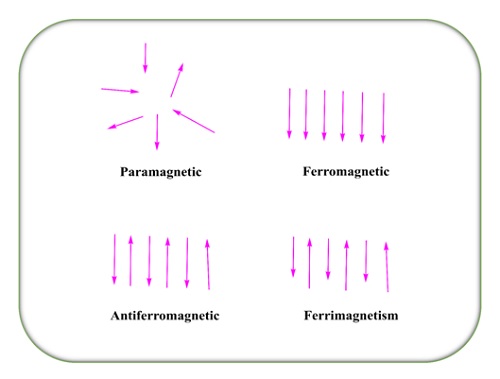 Iron oxide were obtained from natural sources in several types of pure formFe3O4 and γ-Fe2O3,in recent days these oxides were widely studied by the author because of distinctive oxidation state dependent characteristics and they also have ability to eliminate the contaminates. In paramagnetic crystal states random alignment of magnetic motion gives a zero-net magnetisation. External magnetic field were applied to paramagnetic state this align magnetic motion resulted in small net magnetisation. Although, in ferromagnetic states, and antiferromagnetic states, there is no applied external magnetic field but also, they give randomly aligned magnetic motion. 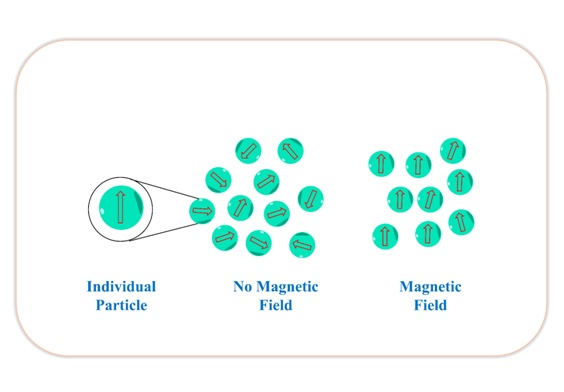 Fig. 2 Magnetic Moment of MNPs in presence or Absence of magnetic field

Synthesis and Characterisation of MNPS –

Commonly, surface modifications and surface coating technique is use for the development of MNPs for biomedical application. Furthermore, Surface modification is carried out by Ligand exchange and ligand addition method.

The distribution of active pharmaceutical ingredient target place or desired position in the body is called as drug delivery. The delivery of medicine to specific condition’s is a critical condition in treatment of various diseases such as, cancer, cardiovascular diseases, diabetic and microbial infection attacks. Different forms of nanomaterials have researched for site-specific delivery with the advancement of nanotechnology MNPs are the front of lines of the target the drug supplies, bioimages, gene therapy, biosensors, and magnetic imaging. Among such nanomaterials such products deliver concentration medication supplies, fewer side effect and less pain to patient. For example, IONPs such as, iron oxide superparamagnetic, biocompatibility and non-toxicity (γ-Fe2O3 and Fe3O4. These have many bio-medical uses such as drug delivery, tumor screening, gene therapy, treatment of iron and genetic and cellular in vivo marketing. Drug use, transmission of target and clearance from the organism are main process that affect the efficacy of medical drug. They can be managed by advanced MNPs.

In the late 1970 the concept of targeted drug delivery treatment was introduced [32]. The alternative medical approach for the treatment of various human diseases is the selective application of medicines. Chemotherapeutic agents functionas foreign object the human body that are transferred by circulatory system to the disease goal. The body system initiates a process to eliminate these objects by means of an excretory system until foreign object such as drug molecule enter the living system. The actual dose of the drug cannot thus reach target because of which particular disease is difficult to heal unspecific supply of chemotherapeutic agent can damage healthy tissue seriously as well. Therefore, the targeted procurement of medicinal items has advantages compared to the traditional application. Further specifies available in the MNPs, as a MNPs have an external magnetic field, contributing to such drug delivery.Fig.3 shows Type’s drug delivery system of magnetic iron oxide nanoparticle 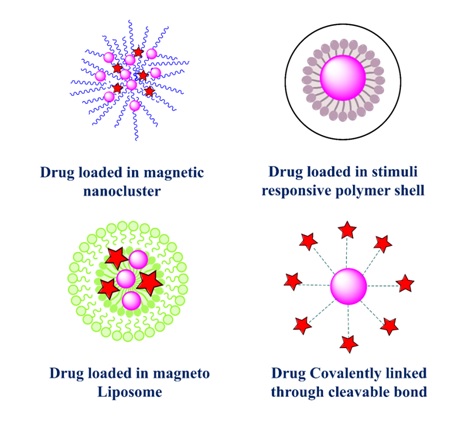 Magnetic Resonance Imaging (MRI) and its Application in Drug Delivery and Diagnosis: -

The MRI provides a variety of diagnostic and therapeutic applications. It is one of the best and most non-invasive imaging equipment in biomedical imaging. The MRI is used in cancer treatment, in the administration of drugs, and in the visualisation of cells. Cancer is heterogeneous and complex illness for human being. With various genetic and behavioral reactions, it has changes in behavioral and complexity. In addition, cancer cells establish chemical and radiotherapy resistance, which is the main problem for the disease management. Though developing science and discovering new drugs, the patient diagnosis, care and survival of cancer are improving tremendously.The first step in a cancer cure is the identification of the disease condition and position in the human body following the delivery of the drug. The MRI is used for the guided delivery of the drugs especially. This has high resolution 3D imaging potential and offers soft tissue information and identification of cancer tissue intratumoral, filled with MNPs. Magnetic IONPs and SPIONs have become the very relevant over the past decades as MRI contrast agents in the delivery of cancer drugs.

The IONPs are activated by interacting with the targeted ligands, which can bind to other biomarkers such as the biomarker of the cancer. For example, peptides and antibody fragments that directly bind to biomarker or receptors, have been over expressed. In tumor cells such αvβ3 integrin, MUC-1, HER2/neu, EGFR, uPAR. The antigen membrane was connected prostate-specific, to the nanoparticle’smagnet iron oxide sheet. The nanoparticles accumulate and maintain a particular tumor tissue site and provides a T2 contrast to cancer detection through MRI.

Detection and Treatment of Hepatitis:-

A infectious disease, hepatitis is one of the world’s most significant health issue, although vaccination against the disease are being used the majority of the developing world do not have the means to care this deadly disease. The development of nanotechnology has made it possible for us to use it against hepatitis over the last few decades. MNPs are useful in terms detection and treatment of hepatitis virus. No significant research has performed using magnetic iron oxide nanoparticles to detect and eliminate hepatitis B viruses. SPIONs-loaded DNA enzymes have been used to efficiently deliver and clear hepatitis C virus has that has tested by MRI. Antivirals and lipid-loaded vaccines have been effectively delivered for specific target.

Detection and Treatment of Breast Cancer:-

For women worldwide, breast cancer is one of the most common cancer in women. Drug resistance and metastases in multiple organs, including lungs, liver, bone and lymph nodes are the major cause of death from breast cancer. Nosrati et al. have developed and synthesised magnetic IONPs to effectively treat MCF-7 breast cancer. They synthesised the L-lysine coated magnetic IONPs combined with methotrexate via a single pot process. They tested in-vitro assay (MTT) for the anti-cancer effect on MCF-7 cells lines. The drug release trial was conducted by cleavage of the peptide bond in the presence of proteinase k at low pH. Through MRI F-Lys magnetic IONPs was monitored.

Detection and Treatment of Cardiovascular Disease:-

A massive progress had been made over recent decades in the management of cardiovascular diseases. Yet they are the world’s major causes of death. Advanced diagnostic material and techniques, drug delivery and cardiovascular disease care are still required. The treatment with MRI. The technology is invaluable to cardiovascular diseases as it provides multiple benefits over the conventional therapies. This is non-ionizing, invasive and several fabrics are suitable as MRI agent contrast. For MRIs for drug administration and diagnosis of different forms of cardiovascular diseases such as heart attack and atherosclerosis, MNPs are often used as a contrasting agent. Work has shown that the uses of MRI SPIONs can be useful in determining active chemical events.

The synthesis of MNPs plays significant role over the last decades with advent of nanotechnology. Advancement in nanotechnology, researcherexplored synthesis of nanomaterial and their potential applications in biomedical science, and MRI, small animal imaging. Various types of formulation of MNPs used for the diagnosis.

Magnetic nanoparticles made significant impact on the biomedical research, in particular treatment, distribution of drugs and MRI.MNPs are commonly used to diagnosis of different kinds of cancer, cardiovascular, infectious disease, and bacterial disease. As synthesis and development of surface modification will further enhance and increase the applications. 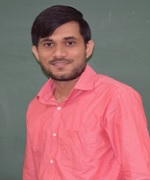 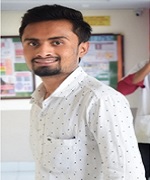 Shubham R Musale has graduate in pharmacy from Savitribai Phule Pune University. He got fellowship for M.pharm from AICTE. The Thesis titled for M.pharm Design of In-expensive Collector for preparation Electrospun Nanofiber. He has 2 review publication and 1 Book Chapter. 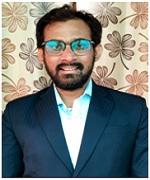 Sushil Y Raut has over 12 years of teaching and research experience. He has more than 25 research and review publications. He filed 3 Indian patents and over 20 national as well as international presentations in his credits. He is recipient of international research mobility fellowship and other prestigious awards.