During the last few years, pharmaceutical companies have shifted their focus in Pharmacovigilance operations from "compliance" to "productivity". In the midst of the current economic crisis, this tendency seems obvious. However, another trend is emerging. Some leading firms have turned their functional strategies in this area from "productivity of operation" to "strategic value of safety profiles.

Pharmacovigilance (PV) is an essential part of running a pharmaceutical company-whether it is in Asia or around the world. Most executives have viewed it as a "cost centre" and non-strategic. However, this has changed over the past few years as product safety has become a critical issue in keeping products on the market and avoiding huge potential liabilities. Nevertheless, the view of PV as a cost of developing and marketing a drug has led to a focus on productivity.

Pharma companies around Asia have demonstrated interest in improving productivity in PV operations. Part of this relates to the fact that companies are receiving a growing number of safety reports. And government initiatives in Japan, the US, and elsewhere threaten to further increase these numbers. While the number of safety reports has been increasing, companies have worked hard to decrease the number of staff in their PV organisations. As a result, productivity-in terms of the number of processed reports per staff-has improved in many companies. And, in light of the current global economic crisis, this is the right trend. In fact, most pharma companies are increasingly concerned about how to process safety reports at a lower cost. While this is a clear opportunity for the industry, they are foregoing potential value from carefully managing the safety profile of a product.

Meanwhile, how to effectively manage their pharmacovigilance operations in light of growing demands in regions such as Asia, is a growing concern. Knowing this, PRTM undertook a survey of PV practices of companies operating in the largest pharma market in Asia - Japan. This survey was the second such survey and was completed in 2008. A total of twenty six foreign-owned and domestic Japanese pharma companies participated in the survey - with seventeen of these being repeat participants from a largely similar survey which was completed in 2005. These two surveys provide a unique perspective on operational trends in PV in Japan.

Between 2005 and 2008, several clear trends for change have emerged. For example, the majority of companies operating in Japan clearly demonstrated an interest towards improving productivity over this interval. This is a clear shift from past practices, when companies had been more focussed on compliance - partly due to the 2005 Pharmaceutical Affairs Law revision in Japan. The 2008 survey captured industry trends from three viewpoints: productivity, cycle-time, and quality management. Several key changes were observed as a result.

A core set of questions in the two surveys focussed around perceived compliance risks. The industry's level of perceived risk declined considerably during the interval between the two surveys. In 2005, nearly half of all participants reported a high degree of risk of receiving a verbal warning from the Japanese agency (PMDA) in reporting compliance, and nearly 60 per cent of companies reported a moderate-to-high degree of risk of receiving a verbal warning relating to newly-implemented (April 2005) GVP (Good Vigilance Practice) and GPSP (Good Post-marketing Study Practice) regulations. In contrast, by 2008, less than 20 per cent of companies perceived a risk of non-compliance. This indicates that the industry has effectively adapted to the new regulatory standards. 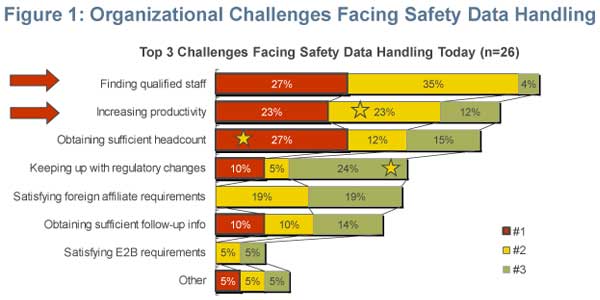 India is also one of the most preferred Asian countries for R&D activities. Easy availability of patient pool, diverse disease profiles in the patient population, an estimated cost savings of 50 percent in Phase I studies and 60 percent in Phase II & III studies and well-equipped institutions with skilled professionals are t he major driving forces behind this trend . The country has also become TRIPS compliant since the year 2005, which also makes its pharmaceutical industry more attractive. The drug laws are also being amended to allow same phase clinical trials as in the country of origin. In addition, India has regulations that provide fiscal incentives for R&D activities. Consider this - India has the largest number of FDA approved plants after the US.

Total number of reports processed by pharma companies showed an average increase of 14 per cent between the two surveys. At the same time, companies reported an average of 6 per cent decrease in the number of staff. While companies struggled with either excess resource or excess workload in 2005, most have managed to find a reasonable balance since the first survey (Figure 2). 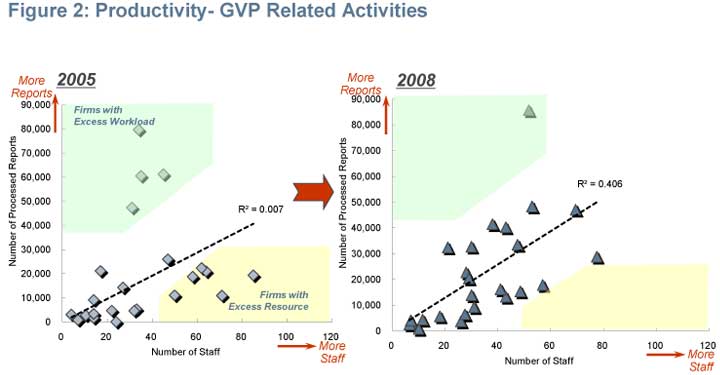 No significant change was seen in the total number of Post Marketing Surveillance (PMS) studies conducted by pharma companies. At the same time, an average 22 per cent increase was reported in the number of staff because the size of each PMS study increased. The industry average of the number of surveys conducted per staff decreased by 37 per cent between the two surveys.

Many companies have started to utilise performance metrics and progress tracking reports - an indication of company's increasing concern about productivity. 94 per cent of the repeat participants reported using standardised progress-tracking reports, and 30 per cent reported using performance metrics to evaluate the effectiveness of safety data handling.

Many companies invested time and effort to ensure quality within pharmacovigilance in 2008, as seen in the increase in adoption of the most rigorous pharmacovigilance practices as compared to 2005. In addition, more companies reported an increase in the number of physicians (as opposed to pharmacists or other license holders) in their pharmacovigilance processes than in 2005. The average number of in-house physicians, who were directly responsible for the safety of post-marketed products, increased by more than 50 per cent per company compared to 2005.

Responses from participating companies indicate that many companies were still struggling to achieve a balance between high productivity, short cycle-times, and high quality - although a few foreign-owned companies are beginning to approach a balance. There were, a few groupings of companies that emerged from the results in the most recent study: 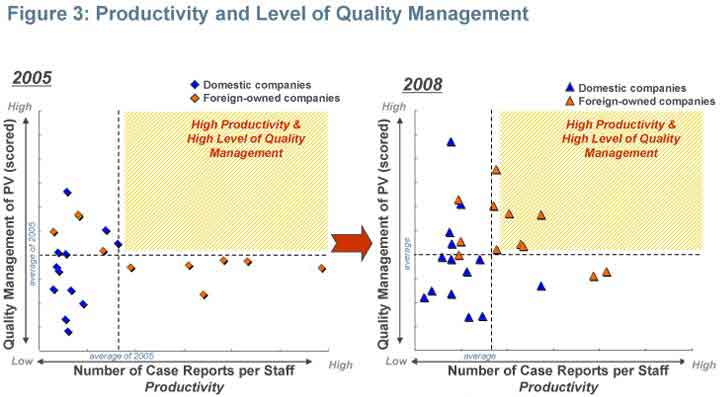 Shorter cycle-time and a high level of quality management

Usually, a high level of quality management translates to longer cycle-time, but some companies, mostly foreign, were able to achieve a relatively shorter cycle-time than other companies in the study completed in 2008. Foreign-owned companies have the opportunity to leverage high quality PV practices with shorter cycle-times from global headquarters. Domestic companies seemed to still be taking a trial-and-error method to balance speed and quality. (Figure 4) 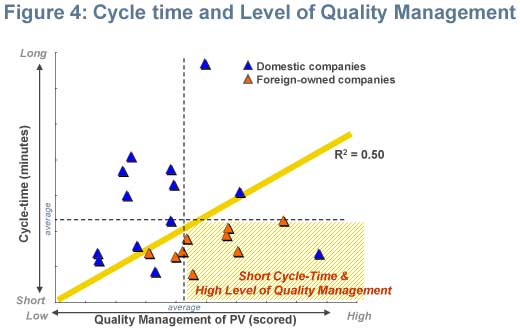 Companies demonstrating high productivity seemed to require average amount of time to process a single domestic case report. On the other hand, companies with lower productivity seemed to utilise different approaches as a consequence to their relatively larger level of resources. One firm stated a strategy of taking as much time as it could to process a single case report. Almost half of the participants with lower productivity exhibited longer-than-average cycle-times. The other half, in contrast, had a shorter cycle-time than average (Figure 5). 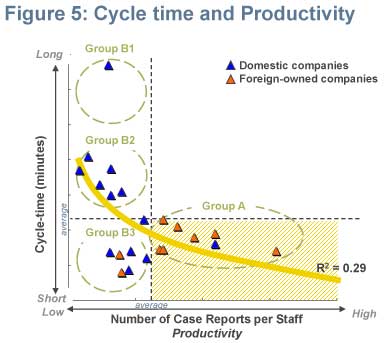 We see an increasing amount of attention being paid to improving the pharmacovigilance function within pharma companies today. Survey data shows that, while the industry focussed on compliance in 2005, things have changed more recently. As they became more aware of growing costs in PV, they started to focus on productivity, as demonstrated in the more recent study data. It is not surprising, then, that most of the participants viewed pharmacovigilance as an organisation to process safety data pursuant to the regulations-a cost centre. However, more recently, a few senior executives at global companies have taken on an entirely different perspective. Instead, they view that their PV function should be viewed as a strategic asset-one which could, if managed well, help create value for their company. This stems from using the product's safety profile effectively in the marketplace.

It is clear that many companies will continue to focus on operational efficiency in order to identify improvements. This will enable them to achieve both high productivity and shorter cycle-times while maintaining a high level of quality management. For them, pharmacovigilance function is considered to be the area of process "Kaizen."

Yet, we should not ignore the emerging approach of viewing PV as a source of value creation. Those few leading global companies which view this operation as strategically important will tend to focus their efforts and improvement initiatives differently. For them, balancing three performance perspectives is important - but it is not their main focus these days. In order to fully capture a product's safety profile, they strive to collect more safety data by performing statistically sound post marketing studies in multiple regions of the world. With diversity and density of the data, they then help differentiate their product against the competition - and will eventually increase product value.

In 2009, will we witness an increase in this trend? Will more companies shift from process-oriented view to value-creating view of pharmacovigilance?

Christopher Albani is a partner with PRTM and leads our Japan business as well as our Asia life sciences team. With more than 23 years of experience in healthcare, Chris has worked with companies around the world on many areas-including clinical development and pharmacovigilance. Yorozu Tabata is a partner with PRTM Japan specialised in life sciences in Japan. Yorozu has worked with global and domestic pharmaceutical as well as medical device companies.