Some sense and simplicity

With the advancement of our understanding of pathobiology of many cancers, many biologically targeted agents have been developed. This requires a paradigm shift in clinical development, based on rational design and moving towards personalised medicine.

The burden of cancer as a global health problem is underscored by its increasing incidence. With better understanding of the biologic processes underlying the causes and progression of cancer, great strides have been taken in inducing incremental improvements in survival. Indeed the face of oncology has changed in the last decade from a paradigm where a diagnosis of cancer and treatment decisions were based primarily on morphology and histology, to one where treatment decisions are now tailored based on molecular profiling of tumours. However, these new avenues of molecular approaches come at a price: Cancer has become a highly segmented disease with over hundreds of biologically distinctive diseases that require differential therapeutic approaches. In an environment, where pharmaceutical companies are facing a difficult future with higher hurdles of regulatory approvals, sustained costs to research and development, patient segmentation, restricted reimbursement, patent expiry, or decreased growth revenues, oncology no longer remained sacrosanct.

Increasingly restricted reimbursement can ultimately affect the patient outcome. Recent examples are drawn from The National Institute for Clinical Excellence (NICE) in United Kingdom, which has a stringent approach to cost-effectiveness evaluation and has resulted in negative guidance for several oncology agents, although ?end-of-life? appraisal has begun to address this issue. Stricter definition of innovation is required, which aims at the provision of clear patient benefit and more individualised therapy. With more than 500 anti-cancer compounds in various phases of clinical development, there is lesser and lesser access to patients for enrolment in clinical trials, which presses the need for ?smarter? and ?simpler? clinical development strategies. The question posed here is: What would make sense to achieve personalised medicine for cancer?

In the last decade, there has been a major shift towards the use of rationally-designed, tumour-targeted therapies. Indeed, targeted drugs such as rituximab, trastuzumab, imatinib, erlotinib, lapatinib, bevacizumab, and cetuximab have revolutionised the treatment of a variety of cancers. With the increasing number of targeted agents in clinical development, several unique issues are identified. The article sheds some light on these issues, addresses some lessons from the past, and the implications for late phase clinical trials.

Although the advances made in cancer management are based on the results of the hundreds of clinical trials that assess the benefit of the new therapeutics on patient survival and quality of life, there is an increasing need to change the paradigm of demonstrating anti-tumour activity of newly developed agents. There is a need to do more work upfront in order to conduct smaller, less resource intensive mechanistic clinical trials that provide a deeper understanding of the biological consequences of the targeted agent on signalling networks involved in the regulation of tumour cell growth and survival. Indeed, the ?bench-to-bed and back again? concept has now become the new model for developing new anti-cancer agents (Figure 1). In this model, arsenals of drugs are being developed that are based on our understanding of the transcriptomic, proteomic, and the genetic and epigenetic changes that occur in cancer cells. More emphasis has therefore been laid on the use of the diagnostic, prognostic and predictive biomarkers in all phases of drug development. Easy as it sounds, the reality is that there are few markers of response that are validated and are acceptable to regulators.

Despite the shortcomings of pharmacodynamic biomarkers, its applicability in clinical trial setting has demonstrated tangible benefits. One of the successful strategies in rationally designed clinical trials is testing of new agents in ?window of opportunity? phase II setting. Typically, these studies are designed as single arm small studies (approximately 50 patients), where the study drug is administered for a short duration, usually between 2-3 weeks, in the neo-adjuvant setting. The main premise of these trials is based on measuring pharmacodynamic effect(s) of the tested drug in paired pre- and post-treatment tumour biopsies, e.g. changes in receptor expression and / or the activation state, downstream signalling pathways, anti-tumour proliferative activity as detected by Ki-67, and / or ability to increase the rate of apoptosis. Further information is obtained by utilising PET, or DCE-MRI, and / or proteomics and transcriptomics of serum samples. There is a plethora of such studies in the literature. Conceptually, such an exploratory approach is very useful, as it provides a direct in vivo assessment of the biological activity of a new chemical entity; understand the potential mechanism of action in inhibiting the intended target; and correlating the biological and clinical activities.

Identification of putative predictive markers of response could be utilised as surrogate endpoints for clinical activity in subsequent confirmatory studies for validation. Moreover, with carefully designed trials, this approach could provide an understanding of the patient population who would potentially benefit from a given treatment and therefore insight into the patient selection in further phase II and phase III trials.

Despite their increasingly widespread use, the utility of biomarkers in clinical setting is hampered by methodology issues, by the lack of consistent results in multiple testing for the same and across tumour types, and by trial design issues. For instance, various studies demonstrated conflicting results on the value of decreased proliferation as detected by changes in Ki-67, in predicting for response of breast tumours to aromatase inhibitors, tamoxifen, or chemotherapy. To put this all in context, it is important to remember that the role of biomarkers remain largely exploratory.

To limit the diluting effects of methodology deficiencies in measuring these biomarkers, the following is recommended for consideration in trial designs. First, careful selection of homogeneous patient population will limit the variability in detecting or measuring a biological effect. With short-term administration of a tested drug up to three weeks, it is possible to design studies in earlier disease settings, which are considered ethical and would not have an adverse effect on the delivery of standard treatment in most tumour types, such as breast, colorectal, or head and neck cancers. The timing of the biopsies, the standardisation of the assays, and the scoring systems should be carefully considered in order to maximise the ability to detect a pharmacodynamic effect. More importantly, these studies should be designed as randomised trials. The control arm could be a standard treatment, or placebo, or even a different dosing schedule of the tested drug. Multiple dynamic biomarkers should be examined to provide a more global understanding of the drug?s biological effects. With adequately powered clinical trials, it is possible to gain information that would dramatically help tailor and accelerate drug development strategies.

Some success stories can be drawn from the lapatinib development in advanced stage breast cancer. Lapatinib is a dual tyrosine kinase inhibitor of both EGFR and HER2 receptors. In a recent study in refractory inflammatory breast cancer (IBC), the co-expression of the activated, phosphorylated forms of HER-2 and HER-3 seemed to predict for a favourable response to lapatinib. More recently, short-term administration of lapatinib up to six weeks was assessed in patients with locally advanced Squamous Cell Carcinoma of the Head and Neck (SCCHN). Compared to placebo, there was a significant reduction in proliferation, but no difference in inducing apoptosis.

Well-conducted clinical trials are essential for successful oncology drug development, and consequent improvement in patient outcomes. Although single arm small phase II studies have been extensively utilised for an early read out of activity of new cytotoxic or cytostatic agents alike, it is argued that their true value in advancing medical research may be limited, in light of false positive results that are often obtained, and the lack of efficacy when the drug is tested in confirmatory randomised clinical trials. For phase II screening studies to have a useful role in oncology drug development, it is important that homogeneous-enriched patient population are selected; that randomised design be considered, even if not statistically powered. Alternatively, the use of innovative trial designs, such as adaptive or sequential designs, have gained traction as strategies in the development of oncology drugs, particularly as these designs have become increasingly accepted by regulatory authorities as the basis for examining the efficacy of a tested drug in phase III setting. With such designs, smaller patient sample size is generally required, and the studies can be stopped earlier in the absence of patient benefit.

In conclusion, there has been a major leap in oncology drug development, with multiple success stories of drugs that truly and effectively improved the patient outcomes and quality of life. Some of major lessons from these new targeted agents are the importance of target selection; and the changing goals of phase I and phase II trials, including not only traditional endpoints such as pharmcokinetics, assessment of toxicity, clinical efficacy, but also insight into mechanisms of anti-tumour activity, identification of surrogates of activity and panels of biomarkers that predict for response. These tools will hopefully facilitate the drug development process through rational rather than empiric drug development strategies, clinical trial design, patient selection, and approach to combining therapies to overcome or prevent the development of therapeutic resistance. 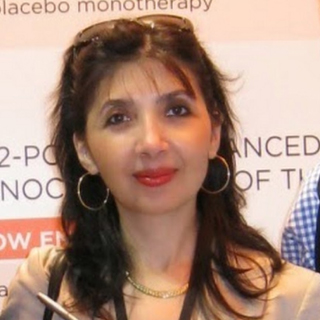 Iman El-hariry is a clinical oncolgist, who did her training in Alexandria Medical School, Egypt, and gained her PhD at the Imperial College, London. Currently, she is leading globally the clinical development in head and neck cancer of lapatinib at GSK.