Promising field for medicines for the future

With the early generation of biologics starting to lose patent protection, the field of biosimilars too has been gaining attention. Biosimilars are the generic version of a biologic drug developed for launch post the patent expiry of the original drug. While it is relatively very easy to develop the generic versions of small molecules, it is extremely complicated to develop biosimilars due to the technical challenges associated with biologics. There has been considerable interest in biosimilars in developing countries due to the needs of the local population for affordable medicines as well as the pharmaceutical manufacturing experience available locally.

Up until a few years ago, the field of medicine was largely dominated by small molecules or pharmaceuticals as they are more commonly known. Large molecules, or biologics, were relatively less heard of and there were very few players operating globally in this area. Over the past two decades, the biotechnology industry has come a long way. According to a report prepared by the Department of Industrial Promotion and Policy (DIPP), Government of India, the global biologics market is expected to be around US$290 billion by 2020 accounting for an estimated 27 per cent of total pharma sales.

Biologics are a particular genre of drugs whose active ingredients are sourced from living organisms that have been specifically modified to produce the desired molecules. Unlike small molecules, which are usually produced by chemical synthesis, biologic drugs are giant molecules, typically proteins, which are hundreds of times the size of a conventional drug molecule. Such large proteins cannot be manufactured through chemical synthesis, but are produced inside animal cells or micro-organisms such as bacteria and viruses cultivated in large fermenters, or sometimes even in specially modified (or ‘genetically engineered’) plants or animals (and extracted from the leaves of the plant or milk of the animal).

The first generation of biologic drugs, such as insulin or growth hormone, were natural proteins produced through large-scale production techniques, and mostly used as replacement therapies for patients suffering from deficiency. In newer drugs, natural proteins are altered, by a process known as protein engineering, to perform specific tasks. The key advantage of biologics over small molecules is that they mimic the normal complex function(s) of proteins within the body, which often cannot be replicated by a small molecule, inherently foreign to the body.

While the advantages of biologics are known, there are some challenges too. The molecules are complex and delicate, and require careful handling. Sometimes a modification in one corner of such a large molecule may be difficult to detect by analytical techniques but may have significant impact on its function. Protein drugs are difficult to take as well. They must be injected, infused or inhaled, as they are destroyed in the stomach when swallowed.

The key step in the production of a biologic drug is to create a ‘genetically engineered’ animal cell or microorganism (or in some cases plant or animal), i.e. one whose genetic code has been modified to produce the desired protein. The overall drug development pathway for biologics remains the same as small molecules, starting with identifying the target, validating the information, screening and testing, followed by pre-clinical and clinical trials before its commercial approval.

Newer generations of biologic drugs have started delivering cures, by using viruses to deliver ‘gene therapy’—the replacement of a faulty gene in a patient’s body cells with the correct version or a specially designed version. Biologics have thus revolutionised the treatment of complex diseases such as cancer and rheumatoid arthritis. However, because of the technical challenges referred above, biologic drugs are often more expensive to produce than small molecules.

Modern protein-based drugs have become a major force in the pharmaceutical industry. According to a report by Visiongain, up to a third of new drug approvals in developed markets have been for biologics and they accounted for seven of the ten bestselling drugs in 2013. Morningstar, an investmentresearch firm, estimates that biologics will contribute 32 per cent of the big pharma companies’ sales by 2023. Multidimensional alliances, where large multinational corporations partner with research organisations, or biopharma companies collaborate with biotechnology institutions, have proven to be very successful. Such alliances seem to have become the model for this industry and these alliances are also constantly adapting to their dynamic environment. In this scenario, it is necessary for pharmaceutical companies to network more, become global and commercial, and abide by regulations that support an environment of innovation.

With the early generation of biologics starting to lose patent protection, the field of biosimilars too has been gaining attention. Biosimilars are the generic version of a biologic drug developed for launch post the patent expiry of the original drug. According to a Grant Thornton report on biosimilars, twenty one biologics, with a market value of about $54 billion, will be losing patent protection by 2019 in the US alone. The DIPP report estimates that biosimilars will account for about US$25-35 billion of the total biologics market by 2020.

While it is relatively very easy to develop the generic versions of small molecules, it is extremely complicated to develop biosimilars due to the technical challenges associated with biologics. Moreover, since biologics are made in living organisms, it's difficult to make an exact replica of the product and the biosimilar product may either be better or significantly worse than the original. Earlier it was believed that it was impossible to develop a biosimilar that is equivalent to the original molecule in all respects; however with the advancement in the field of process technologies and analytical technologies, developing products matching with the original drug in structure as well as clinical function is possible. A number of biosimilars have now been approved the world over.

There has been considerable interest in biosimilars in developing countries due to the needs of the local population for affordable medicines as well as the pharmaceutical manufacturing experience available locally. As per Make in India campaign by the government, Indian biotech industry, comprising bio pharmaceuticals, is expected to grow at a rate of 30 per cent a year and reach US$100 billion by 2025. A new biosimilars policy called the ‘Guidelines on similar biologics’ prepared by the Central Drugs Standard Control Organization (CSDCO) announced by the Indian Government is expected to give a major boost to the Indian biologics and biosimilars industry making it more competitive in the global arena. 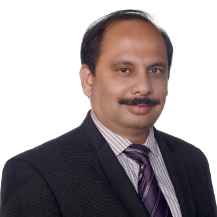 Dhananjay holds a Ph.D from the University of Utah, USA and a Post-Doctoral Fellowship from the Rutgers University, USA and has done his Master’s degree in Chemical Engineering from the Indian Institute of Technology, Mumbai. He has over 20 years of professional experience and has been a leader in the Indian biopharmaceutical industry. He has been serving on Expert Committees with the US Pharmacopeia for the last 5 years. Prior to joining Syngene in 2010, Dhananjay worked with Intas Biopharmaceuticals as Chief Operating Officer where he led the development and commercial manufacturing operations of several biologics for the global markets.